This week we have another vicarious excursion to Portugal, not to Madeira as was the case with the 2004 Barbeito Madeira Tinta Negra two weeks ago, but to what is arguably the nation’s most renowned wine region, the Douro. By the way, the interval between these two Portuguese wines should have been one week, but I had an unscheduled stopover in the Loire Valley last weekend, stranded by a strike which resulted in the cancellation of my Friday afternoon flight. I made good use of my extra time there, visiting Famille Lieubeau and exploring Clisson and its environs, but apologies for the lack of a Weekend Wine update last Monday.

Dow’s is of course one of the most famous of all the Port houses, with a history stretching back to the closing years of the 18th century when a local trader, Bruno da Silva, began shipping the region’s wines to London. In later years the business he founded changed hands (and changed names) several times, and it was the arrival of James Ramsay Dow in 1877 that would eventually give the firm its modern-day moniker. Now part of the Symington empire, Dow’s today has a fine reputation at all levels, testament to this being not only this week’s wine, but the Dow’s Crusted Port I recall featuring only a year or two ago. 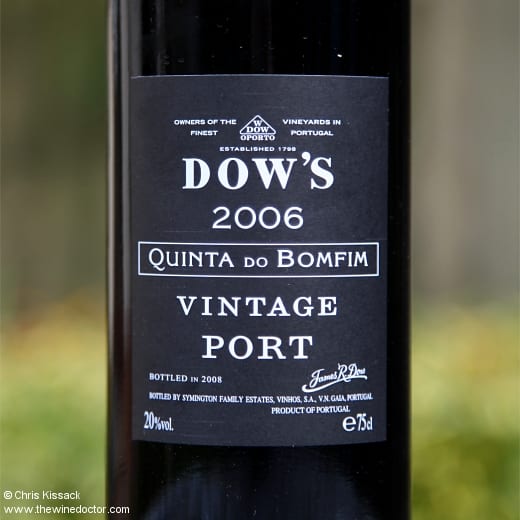 The firm was an early investor in vineyards, buying several parcels high up in the Douro, which means Dow’s now owns several estates or, as they are known locally, quintas. Of these the most noteworthy is surely Quinta do Bomfim, acquired in 1896, and today the prime source of fruit for the firm’s flagship port in declared vintages. In undeclared years, such as 2006, the wine is usually of sufficient quality for it to be bottled in isolation. This reflects the character of the vineyard, an expansive 50-hectare south-facing slope of schist, with excellent drainage, these features complemented by a systematic program of replanting which began back in the 1980s. This has resulted in a very modern vineyard, with planting mostly of Touriga Nacional and Touriga Franca, in variety-specific parcels.

The 2006 vintage was a difficult one for the Douro, marked by extremely dry weather during May and June, complicated by a hailstorm which passed over the Pinhão (where Quinta do Bomfim is found) and Torto valleys on June 14th. July was even hotter, with more heat in early September, and many younger vines really struggled in the drought. The harvest began on September 11th and perversely, in view of the warm and dry weather which until that moment had defined the season, it was hampered by heavy rain starting from September 13th. It ended up a vintage of variable quality, with vineyards at low altitudes and with old vines doing best, so while not a declared vintage, there is good potential for single-quinta wines. The 2006 Quinta do Bomfim has a great colour in the glass despite having already seen out ten years in bottle, an opaque matt hue at its heart, with a crimson-cherry rim. The nose does seem to speak of the warmth of the vintage, with aromas of sweet black liquorice, a confit edge to the blackcurrant and grilled cherry fruits, laced with notes of tobacco, violet cream, soot and black pepper. The palate provides some contrast, with vibrant and sweet fruits, although it remains rather spicy, with liquorice and soot, and it is still loaded with peppery tannin. It has a very rich texture in the middle, plush and broad, more so than would usually be expected for Dow’s I think, with a fabulously creamed confidence cut with good acidity and a fine peppery energy on the finish. All in all this is a very impressive result in a challenging vintage, and while it can be enjoyed now I suspect it has a few decades in it yet. 95/100 (16/12/19)